Each summer, baseball fans of all ages enjoy Bee Jays baseball - Liberal's own semi-pro team. The Bee Jays have made their mark as a premier team winning the national championship 4 times, most recently in 2000. 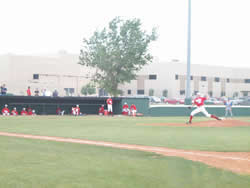 The Bee Jays are named after baseball pioneer Byron Bancroft Johnson, the creator of the American Baseball League. After a short stint as a baseball player, "Ban" Johnson took over a struggling minor league circuit in 1893, made it a success, and changed it's name to the American League.

The Bee Jays tradition in Liberal spans more than 6 decades, dating back to 1955. Bee Jays' players are recruited from colleges across the nation. University of Texas at Arlington, Arizona State, Northeast Louisiana and the home town school, Seward County Community College, have all been represented on the team.

The Bee Jays Season runs from June until August. During the season, players share more than a baseball diamond with the City of Liberal. Local residents volunteer as host families for players each summer, and as some host parents will tell you, letting go of their Bee Jays player is sometimes as hard as letting go of their own children.

Thanks to the sponsorship of local merchants, the public can attend the games free of charge.

There was a Board Reorganization in October 2017.  Nathan McCaffrey was named General Manager.  The board is as follows:

There are three new board members as Todd King, Christy Kirk, and Aaron Luman join the board.